On December 11th, the Office of Transportation and Infrastructure System (oTIS) will hold an open house and the final workshop for this phase of the Roosevelt Boulevard Route for Change Program, in an effort to help shape the long-term future of Roosevelt Blvd in Northeast Philadelphia.

The Boards, which are available here, show interim plans (build year 2025) for improving the safety of Roosevelt Boulevard.

Roosevelt Blvd is one of the most dangerous streets in the country and without aggressive traffic and engineering changes, the consistent rates of crashes and deaths don’t seem to changing. In fact, they are only getting worse.

So far this year, 15 people have been killed on the Boulevard — not to mention the countless crashes and injuries, statistics for which we don’t yet have.

The speed cameras coming to Roosevelt Blvd, thanks to the passage and signing of SB-172 earlier this year, should start reducing speeds as soon as they are up and running.

But, a look at the “interim bicycle facility” board shows that bicycle lanes are not being envisioned to help calm traffic and reduce fatalities for the 2025 time frame. Two way bike lanes are envisioned for the long term, which will likely be well after 2030.

The plan for the interim time frame is to connect new side paths on some sections of Roosevelt Boulevard to new and existing bike lanes on adjacent streets.

The plan fills in the gaps in the adjacent Northeast Philadelphia bike lane network, with a zig zag pattern of turns that misses most Roosevelt Boulevard services and employment centers.

As good as it is to see any improvements to Roosevelt Blvd, this is missed opportunity to implement effective bicycle infrastructure both to transform the Boulevard itself into accommodating those who want to use a bicycle for their mode of transportation and to help calm traffic.

There have been many comparisons between Roosevelt Blvd and Queens Blvd in New York City. Queens Blvd is a great example of what Philadelphia should be striving toward. Once known as the ‘Boulevard of Death,’ Queens Blvd shares many of the same design features as Roosevelt Blvd — including 12 lanes of traffic, three medians, and inner/outer lane crossovers.

Since 1990, 138 of the 186 people killed on Queens Blvd were pedestrians trying to cross the sprawling 300 ft boulevard.

However, after years of design and infrastructure improvements, not a single pedestrian or cyclist have lost their life since 2014 on this once notoriously deadly road. NYC DOT planners implemented a redesign that essentially converts the outer lanes to a local road reducing the design speed, installing protected bike lanes and improving bus stops.

Even though the process is not yet complete, pedestrian injuries have dropped 63 percent, on what was once known as the most dangerous road for pedestrians in New York City. 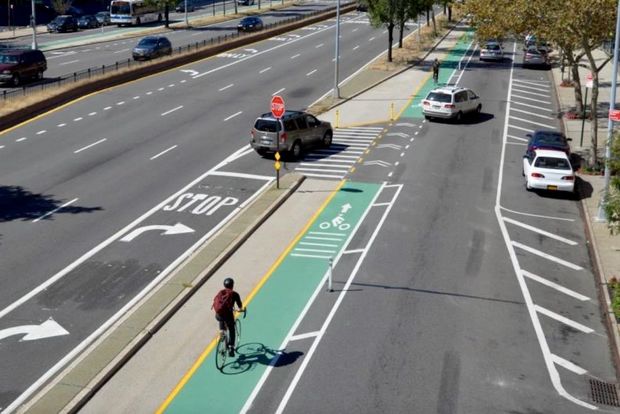 While some of the improvements to Queens Boulevard may not be feasible for Roosevelt Blvd in the near term, innovative safety improvements need to be implemented sooner rather than later if Philadelphia wants to truly transform this deadly arterial. We encourage people to attend the December 11 open house or leave comments here. Comments are due by December, 28th.