During the COVID-19 pandemic, New Jersey residents, like people all over the country, are increasingly accessing the streets as a means to safely get out of the house to exercise to maintain their physical and mental health. In urban neighborhoods, bicycling and walking have been seen as viable alternatives to short transit trips.

But our roads are not safe for vulnerable road users — this year, while overall traffic fatalities are down slightly in New Jersey, bicycle and pedestrian fatalities are up and now represent 30% of all traffic deaths. In our urban areas, sidewalks are too crowded for safe social distancing.

That’s why we are calling upon the Governor issue an executive order to allow communities to designate slow streets. Slow streets are marked with signage and partial barricades to alert motorists that they are sharing the road space with cyclists, pedestrians, and children.

Princeton prepared a Slow Streets plan for the Municipality in early July. But the NJDOT intervened and informed the municipality that Slow Streets are illegal in NJ. DOT based this on a 1955 directive from the State Attorney General (Yes 1955!), during the Eisenhower Administration, when cars were marketed like this: 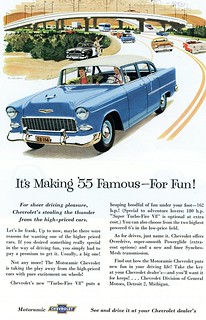 The directive stated that municipalities have no right to regulate the flow of traffic on their own streets. NJDOT has also stated that it will be going after municipalities that already have slow streets program like Jersey City and Hoboken. This goes against the State’s Complete Streets and towards Zero Deaths policies.